Posted on November 25, 2015 by Gray Connections

Profiles in Lung Cancer – Day 24: Jeff McManus “I carry her spirit with me”

Jeff McManus – “I used to be a loner before meeting Cara.”

Jeff was a caregiver for his wife, Cara, who passed away in April 2015. She only survived 20 months after being given her stage IV lung cancer diagnosis. They met in 2006 and quickly became good friends. They would have been married for 4 years in June of that year. Jeff confessed to me, “I used to be a loner before meeting Cara. She brought me out of my shell and we started hanging out with friends.”

Jeff has a PhD in biology and works full time in a research lab. He enjoys his work and his coworkers. In his free time he likes playing trivia with his friends, going to Indie rock concerts, and cooking. He and Cara both loved cooking and often made meals together. He also likes to stay active by riding his bike, another fun activity him and Cara did together, lifting weights, and playing basketball. 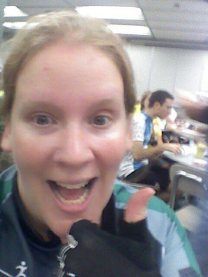 Jeff became involved with advocacy along with Cara. He raises awareness on Facebook and Twitter to help inform others. Lungevity’s Breathe Deep in Cleveland came about largely due to her efforts. She worked on this project for much of her last year, but … read more on Lysa Buonanno’s Blog “Faith, Family & Friends.”