Posted on November 24, 2015 by Gray Connections

November is Lung Cancer Awareness Month.  This year I am participating in an effort to raise awareness through a Lung Cancer Blog Chain.  This is my second contribution.

[*Free to Breathe is a partnership of lung cancer survivors, advocates, researchers, healthcare professionals and industry leaders, united in the belief that every person with lung cancer deserves a cure.    http://www.freetobreathe.org/  ]

Rachael, what is your connection to lung cancer?
Rachael with Lafayette Free to Breathe chair Tanya Farmer 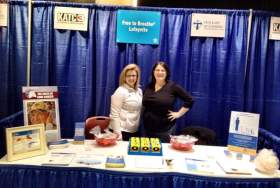 “Four members of my mom’s side of the family have died from lung cancer. Two of them were my mom’s best friends – her brother and her cousin. They both were ever present in my life. In 2012, I learned that someone had started a fundraiser called Free to Breathe in my town, and I decided to participate.  Afterwards, I volunteered on a committee and would eventually become the co-chair of the event a few months later. After I learned that my mom’s cousin, (who passed away in 2009,) and her father, (who also passed away from lung cancer in 1978,) had virtually the same survival rate, I dove headfirst into advocacy. I now focus on patient and community education and outreach, locally, with Free to Breathe.
What is your typical day like?
“Well…I’m a mom with a full time job, so my days are hectic. Until recently … read more on Luna Okada’s blog “Cancer….an unexpected journey.”