Posted on November 12, 2015 by Gray Connections

Profiles in Lung Cancer – Day 11: Kelly Shannon, “We need to show the world who we are”

Nearly 4 years ago, Kelly Shannon was diagnosed with Stage 4 non-small cell adenocarcinoma with the KRAS mutation (more commonly associated with people who have smoked). Kelly was a 35 year old non-smoker when she was diagnosed in January 2012, and since then has endured numerous types of treatments from traditional chemo to 2 separate clinical trials.  There aren’t many options for someone with the KRAS mutation, as there are with and EGFR or ROS-1 mutations.  She is now a 39 year old single mother raising two children, ages 5 and 7, while jumping from treatment to treatment in order to buy time for a KRAS treatment to come out. 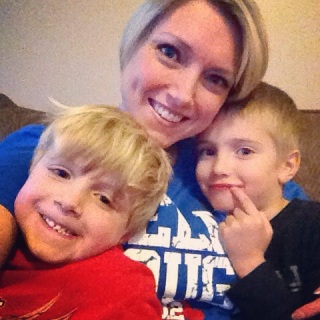 She is currently on traditional chemo that is keeping her tumors stable at the moment. Her longest treatment lasted 1 1/2 years and was a clinical trial where she had to travel from her home in Rochester, NY to Memorial-Sloan Kettering in NYC. It was a very promising clinical trial for Kelly, and it wasn’t expected to keep her tumors stable for as long as it did. The doctors don’t know why that particular drug worked so well for Kelly. She was the last one on the trial for months, until it eventually stopped working for her, and the tumors had spread too much to allow her to continue. We need more clinical trials like this one, especially for people with the KRAS mutation. While it’s been nice not having to travel for treatment, Kelly has hopes that another promising clinical trial will become available for her when it is needed. She will do anything to fight this disease.