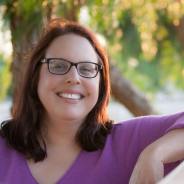 Connection with lung cancer:  Deana’s mother, Rita Stein, was diagnosed with stage 3b lung cancer in June 2012. During Rita’s treatment (concurrent chemo and radiation for 6 weeks) Deana found herself spending a great deal of time in waiting rooms, infusion centers, and unfortunately, her mother’s hospital room. In order to pass the time, Deana began to post lung cancer awareness messages on Twitter, which led to “meeting” other advocates, patients, and physicians on social media. When Deana’s mother died in April 2013, she continued her advocacy, in part, to help her heal from the terrible ordeal of losing her NED (no evidence of disease) mother to treatment complications.
Deana helped found #LCSM Chat (Lung Cancer Social Media) on Twitter, and does whatever she can to raise money and awareness, mixed with a little bit of outrage, on behalf of lung cancer patients and their families. As Deana says, “My mom survived the Holocaust, living in a DP (refugee) camp for two years, and the death of my dad after 53 years of marriage. She never backed down from a challenge. In her honor and memory, neither will I.”

A typical day: She’s online either connecting with lung cancer patients, caretakers and their families, or on Twitter promoting #LCSM Chat and lung cancer awareness.

Something you might not know about her: Much to the chagrin of her ever-patient husband of 31 years, Deana is a veteran animal rescuer, devoted dog mommy, and crazy cat lady. She’s also mom to two adult children, who thankfully do not live at home!

What she wants you to know about lung cancer:  Smoker, former smoker, never smoker:  no one deserves lung cancer. #NoStigma

What brings her hope: Survivors who are *living* with advanced lung cancer. Deana envisions a world where lung cancer is a chronic disease, one that is detected early for the majority of patients, rather than a life-limiting condition.
——–
Each day during Lung Cancer Awareness Month (November), a lung cancer blogger will share a brief profile of someone involved with lung cancer. The person profiled might be a patient, caregiver, advocate, researcher, or healthcare provider.

Tommorow’s post will on Lisa Goldman’s blog Every Breath I Take. [edit to add link to actual blog post once it’s posted]